Cowabunga! What will the guys think about 2014’s Teenage Mutant Ninja Turtles?

There was a TMNT role-playing game?

William Fichtner is ABSOLUTELY a “that guy” actor.

Some of the turtles are “that guy” actors. Like Noel Fisher (Michaelangelo) and Jeremy Howard (Donatello).

Can Hollywood entice creators to whore out their creations? Never!  🙂

Have you heard about my idea for a one-man Hamlet?

Be careful what you say in a near-death experience!

Branching Out Bottle Shop provides the largest selection of premium quality and unique craft beer to the growing Syracuse region. Check them out on Facebook or the web! 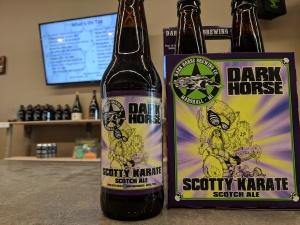 We drank Scotty Karate! For those of you who don’t know who “Scotty Karate” is… He is a local one man band who plays an amazing slurry of honky-tonk influenced, punk-country songs. (Check him out at Scotty Karate Time) A big bold musician deserves a big bold beer, that’s why Scotty and our Scotch Ale are a perfect tribute to one another. Scotty Karate is brewed with cherry wood smoked malt instead of the traditional peat smoked malt offering up warming notes of coffee, caramel and sweet caramelized brown sugar. Scotty finishes earthy giving this beer a character all it’s own, just like the man himself.

(For the record, Todd TOTALLY got this wrong. This is NOT a reference to Chris Pratt’s Parks and Recreation character! Apologies to the actual Scotty Karate!)

Check out Dark Horse on Facebook or the web.

Rotten Tomatoes has the film at 71%.